Have The Election Results Left You Feeling Angry or Cheated? 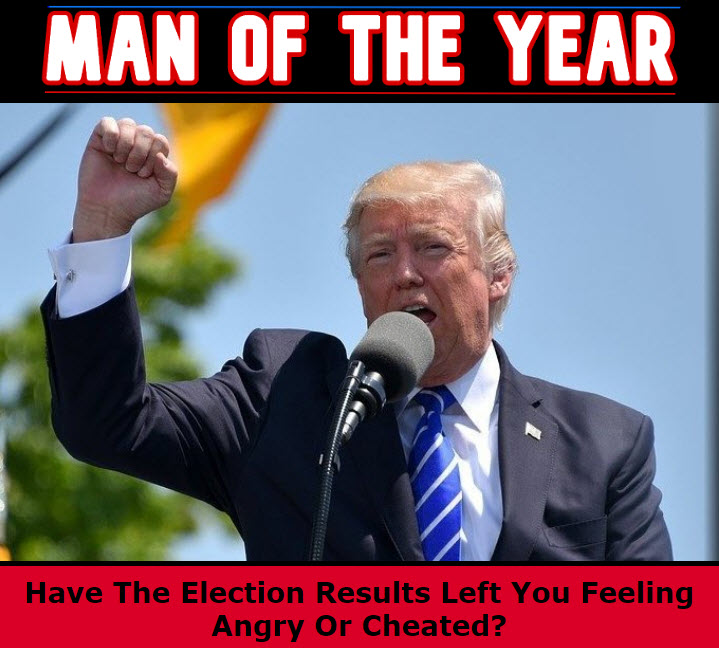 Have The Election Results Left You Feeling Angry or Cheated?

Here I sit, brokenhearted, and this isn’t the same heartbreak as losing a loved one, a lover, or a sick child. No, I didn’t have to put my dog down, or bury a sibling. No, this is totally different. I honestly feel for the first time in my life, “HELPLESS!” Never have I felt so unheard or ignored.

How can the greatest country this world has ever known, not have the same federal voting rules nationwide? How can all the swing states shut off their counting of the ballots in the middle of the night at the same time? Why? How can it not bother every Patriot in this country? How could President Trump be way ahead in Arizona with only 2% of the vote in, and Fox News calls it for Biden? What did they know that we didn’t? How can poll watchers be turned away from watching the ballots be counted, and somehow that’s OK? How many ballots from dead people is acceptable before it is considered fraud? I really want to know the number, don’t you? How can anybody, person, or entity, certify any election that has a fraction of a number involved with it? Example (17,463,991.27) where do we find .27 parts of a person? (I’d love to meet him/her) Why is no one in jail for treason, after falsely bearing witness and using coercion and lies to falsely accuse our President of Russian coercion? Where is the outrage? Have we truly learned to live on our knees?

Forget about party lines, when did the media and the minority become exempt from the laws of our country? If pollsters and the fake media manipulate the polls to purposely dissuade you from voting (because according to them your candidate already lost), isn’t that considered voter interference? If they as a group conspired to do this, wouldn’t that be considered treasonous? Why is it alright for Hillary Clinton to publicly tell Joe Biden that no matter what happens (with the election) “don’t concede”, but when President Trump and his supporters show proof of voter fraud, it’s not enough, or it is ignored, or their called conspiracy theorists? How can Time Magazine even imagine a world, where they could seriously consider giving the notorious mass murderer Governor Cuomo “The Man Of The Year Award?” (I, for one will never f_ _ _ ing, ever, buy or read that magazine again, and I suggest you do the same).  How can Barack Obama have been the President of the United States for 8 years and never do a thing to help lower the crime and/or homicide rate in the City of Chicago where he claimed to have roots? How can President Trump be called prejudice when he’s done more to help better the lives of African Americans then every president who preceded him, except for Abraham Lincoln. How can we accuse President Trump of using his office for personal gain when his home city of New York, has seen the greatest depreciation in real estate in modern history? (and he’s lost more in real estate value, then he could possibly ever make). I mean, how low will they go?

If Nancy Pelosi really cares about the everyday working American (I mean Deplorables, or no, I meant Clingers. No, No, No, I meant to say, “Dredges of Society,” because that’s what Joe Biden called us), why can’t she just approve a bailout package that only helps the above mentioned, and not bailouts that the rest of the country has to pay for, to fix poorly managed cities and states whose elected officials truly believe that money does grow on trees?

And tell me this, did you vote for “Anyone,” so that they could tell you when you can or can’t go to church, or that you can’t be with your loved ones when they are dying, or tell you how many people you can have over your house for the holidays?

Answer this: Do you enjoy the lowest gas prices in recent history? Are you happy with your returns in the stock market, or your 401(k)? Are you happy that the Isis threat is over?

Do you remember when the government broke up AT&T because they were too big, and had too much Power? Do you realize they never censored the President of the United States? Can you even imagine a world where certain unelected individuals are so powerful, they’re allowed to censor the elected President of the free world?

Did you ever think you’d see a time in the United States, where you’d be deemed a racist for wishing someone a Merry Christmas?

Have you asked yourself why all the Internet Moguls hate President Trump? I’ll tell you why, It’s all about power.  They have it, and they take more away from you every day, and President Trump is the only thing standing in their way from seizing complete power over your freedom of speech, which by the way, is guaranteed to you under the United States Constitution. This is not the time to accept the status quo, but rather a time to be heard. Joe Biden didn’t win this election (he’s not cognizant enough). He and his, “Stole” it from President Trump, and the 90,000,000 of us who voted for our true President.

I implore every Patriot to send in $5 - $10 - $25 or more, if you can do so without hurting your family to help win the senate race in Georgia.

If President Trump runs out of time and he can’t get the vote tally right before his first term ends, we have to keep the Senate. There is nothing more important than this vote. If you think your small donation won’t make a difference, think about this...If you truly believe in the saying “In God We Trust. “If you like saying Merry Christmas.  If you like less government and making your own decisions for you and your family. If you don’t believe the President of the United States should be censored.  If you enjoy owning your own business.  If you believe in the Constitution and the right to bear arms and your freedom of speech, and most importantly, if you’re big enough to get by personalities and put your family, your country, and your President first, click https://secure.winred.com/georgians-for-kelly/perdue-for-senate-defend-the-majority, and help us keep the Senate, (or at least know that YOU tried).

Love to hear your thoughts

As always, I remain